A Healthy Community Is An Active Community 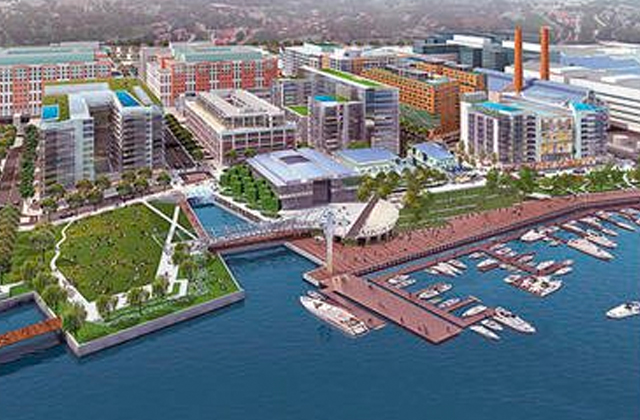 - Written by Stephanie Norton on www.caddetails.com

People’s participation in physical activity is greatly influenced by the built, natural and social environments in which they live, work and play. Today’s urban planners, landscape designers, and architects have a crucial role to play in creating inclusive environments that promote opportunities for physical activity and active living, for all ages and abilities. This article looks at three innovative and influential projects that are positively influencing physical activity in urban settings.

The Urban Land Institute’s annual Urban Open Space Award celebrates and promotes vibrant, successful urban open spaces by recognizing and rewarding outstanding examples of public destinations that have enriched and revitalized their surrounding communities. The Yards Park in Washington, D.C., pictured at right, is one of two inspiring recipients of the 2013 Urban Open Space Award.

The Yards Park highlights a regeneration effort that draws local residents and visitors to Washington’s Anacostia River, while providing a transformative and vibrant public space that generates social, economic, and ecological value under an innovative public/private funding model.

The Yards Park and the 42-acre Yards Development are the centerpieces of the larger 500-acre Capitol Riverfront neighborhood.

The new mixed-use community leverages $2 billion of private investment for every $1 billion in public investment, in order to develop one of the greenest and most active neighborhoods in the United States.

Conveniently located near a Metrorail station along 1.5 miles of Anacostia River frontage just South of Capitol Hill, the space is the result of a pioneering public/private partnership among the U.S. General Services Administration (GSA), the District of Columbia, and Forest City Washington. From 1799 to 2010, the site was part of the Navy Yard annex, until it became abandoned land with no public access. Forest City worked with the federal and local government to remediate the site and develop The Yards as a mixed-use area with 2,800 rental apartments, offices, shops, and restaurants.

Designed by M. Paul Friedberg and Partners, Yards Park seeks to bring Washingtonians to the long-neglected Anacostia riverfront, offering an eclectic blend of human-scale experiences; active and passive landscape “rooms”; custom furniture, shade structures, and plantings; and differentiated elements such as an iconic bridge and light sculpture, public art, terraced performance venue, a riverfront boardwalk, a waterfall and canal-like water feature. Each space transitions into the next, thanks to a considered focus on materials and plantings that complement the riverside location. The National Park stadium is accessible from the Yards Park, thanks to a section of the Anacostia Riverwalk Trail that connects the park by a footbridge to the steps of the stadium's first-base entrance. In addition to accommodating intense casual use, the space is intended to engage visitors and residents through an extensive schedule of special events, including both large-scale festivals and smaller gatherings. The project has been certified gold under the LEED for Neighborhood Development pilot program.

Outdoor gyms have been a phenomenon in Europe for about 15 years. But only in the past three years have they sprung up in North America, where they are growing at an incredible rate, with all-weather fitness equipment being added to hundreds of parks each year.

Outdoor gym-makers such as Norwell Form Function and Outdoor-Fit Exercise Systems, as well as fitness advocates claim adding exercise equipment to green spaces is a spontaneous, accessible way to encourage people to live healthier, more active lives. A mom who is watching her children play, for example, may jump on an elliptical machine rather than sit on a bench. And people with no interest in the sweaty atmosphere of a weight room may prefer to get pumped up in the fresh air - no membership required.

The Great Outdoor Gym Company, a British fitness company, has taken the outdoor gym concept one step further, with outdoor gyms that use human-generated energy to power light installations. For example, a new outdoor gym, dubbed The Green Heart, installed by the Great Outdoor Gym Company in Hull, northeast England, generates enough power to light up the bright neon LED lights around the gym’s perimeter in the evening, extending the hours of use while saving on electricity cost. The company hopes that the gym will soon be able to recharge users’ mobile devices — and one day perhaps even power local buildings. Each piece of equipment can generate between 50-400 watts of electricity, with the average user generating between 50-100 watts.

The Great Outdoor Gym Company offers a variety of cardio, tone and strength-training machines that are color-coded. The machines are very similar to the plug-in machines you might find at a typical indoor fitness club, but they don’t require energy inputs, and they’re designed to need very little maintenance. According to the Great Outdoor Gym Company, people surveyed in areas where the outdoor gyms have been installed have reported increased physical activity because of the convenience and flexibility that the outdoor gyms provide.

The gym also focuses on awareness–in both electricity usage/generation and health. A console in the middle of the gym updates in real time the collective amount of ‘human energy’ (in watt-hours) that has been generated by exercise so people know how their efforts translate. The console also features a ‘bod pod,’ where users can weigh and measure themselves to learn their BMI, with the hope that awareness and exercise can help prevent health issues, such as obesity.

New York City’s Police Athletic League (PAL) runs the PAL Play Streets summer program. The goal of the program is to help enrich the summer experience for local urban youth, by temporarily opening up city streets and giving them supervised and safe places to learn and play.

Established in 1914, the summer Play Streets program has been closing off streets and other public areas throughout New York City for 100 years. More recently, First Lady Michelle Obama’s “Let’s Move!” campaign and the Partnership for a Healthier America launched an initiative in that has brought the play street concept to 10 cities in the U.S. and Puerto Rico.

This year, PAL has redesigned Play Streets into a measurable, goal-oriented program with set objectives and performance targets. Firstly, the program teaches ways for youth to prevent negative behavior and enrich their life skills. Lessons in conflict resolution, health, and safety, as well as gang awareness are all a part of this segment.

The second component revolves around promoting fitness and recreation opportunities. High and low-organizational activities are provided. Dance, volleyball, and double-dutch are offered for older children while hopscotch, relay races and jump rope are taught to younger kids. Open play, board games, and weekly street game tournaments are also part of this component.

The third part is for inspiring the children through culture and arts. Each year this component will have a theme. This summer’s theme is “Exploring the Caribbean.” Play Streets will be assigned an island in the Caribbean, and the children will learn about their island through costumes, art, and dance.

The final segment relates to specialty programs and community connections. The objective for this component is to familiarize the children with their specific community and the resources available to them. Each Play Street will have a community board that has information about where to find their local library, hospital, police station, post office and other important locations. Public interest announcements will also be posted on the board. Various events for the children and their families will be offered throughout the summer. Safe bike riding, escaping burning buildings and other vital knowledge will be presented.

Play Streets are a quick and low-cost way to create active play space and a community health measure that directly targets NYC’s most important at-risk population - children - giving a whole new meaning to “go play in the street!”

The presence and accessibility of parks, gardens, walking trails, playgrounds and other quality public recreational facilities, whether temporary or permanent, has a profound impact on people’s ability to reach the recommended minimum 30 minutes of moderate physical activity per day (60 minutes for children). That is why, in cities and urban areas around the world, ambitious green space development and regeneration projects are underway as well as grassroots community efforts, to enhance the spaces we already have, and to create inspiring new ones. For more inspiring ideas, visit www.CADdetails.com today, and search keyword, “Play”.